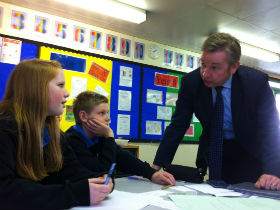 Cameron’s Cabinet reshuffle has been all over the news this week. This one has been dominated by the exchange of the ‘white middle-aged men’ in favour of a new generation of female Tory MPs. And, of course, the removal of education secretary Michael Gove from his post, which has propelled many teachers into celebration.


Behind the headlines I can imagine that some of the former Cabinet ministers are devastated at having lost their jobs. Being in Cabinet would have been their life’s work. How easy it would have been for them to have placed their value in their role.

There is also enormous pressure on the new government ministers to perform, with our 24-hour news channels eagle-eyed for any early slip-up or past controversy. They must be under huge stress to not only master their new briefs quickly but also be seen to be doing so. It sounds exhausting.
A performance-driven culture is an exhausting one. Either because we link our identity with a role or we think we’ll only be happy once we’ve achieved a particular milestone. This culture is frantic and never satisfied. Never content.

I was recently treated out to some drinks in a bar in the City of London. It was one of those fancy ones, far above my pay grade. I got chatting to a successful banker there and we were discussing this very topic when he asked: “But why would I want to be content? Surely I should always be trying to get better results from my work? Then I’ll be satisfied.”

The idea of striving for rest is a powerful one in our culture.

Just look at what advertisers point at to try and sell their products. There’s a particular advert currently being shown in the cinema about a property website (I’m not on commission so I won’t mention the company’s name). There’s soft, relaxing music, a narrator who should get a career in reading children’s books, a dog sat by an open fire. A tidy but lived-in house, in which children clearly live but are not seen or heard. It finishes in a house with a seaside view with two chairs set out and a glass of wine just within arms’ reach. And all of this as a reward for the hard work that you’ve put into your career.

It’s an advert not about complacency, but about our ubiquitous desire for peace and rest. Contentment.
But where do we find it?

In the last chapter of his letter to the church in Philippi, Paul announces that he has discovered the secret to being content (Philippians 4:12). The thread of deep-seated joy, regardless of circumstance, is weaved right throughout the letter.

Paul encourages us that we should find our contentment not in our status but in following Christ’s example of humility (Philippians 2:5). If Jesus didn’t consider equality with God something to be grasped, perhaps we should think about the next rung up the career ladder in the same way.

It’s discovered in comparing what we have in Jesus to what the world can offer us, and finding the world wanting (Philippians 3:8). What could compare to knowing, and being known by, Jesus?

And it’s rooted in an eternal perspective that helps us see what will truly last (Philippians 3:20).
So, I think, Paul would suggest to us that contentment is found in something just a bit more substantial than a new job, a Cabinet post or glitzy new possession.

Andy Tuck is the student worker for ChristChurch London. He is a thinker and wannabe adventurer.
- July 20, 2014 No comments: Links to this post

Email ThisBlogThis!Share to TwitterShare to FacebookShare to Pinterest
Labels: By others
Newer Posts Older Posts Home
Subscribe to: Posts (Atom)