Book review: Why Nations Fail: The Origins of Power, Prosperity, and Poverty 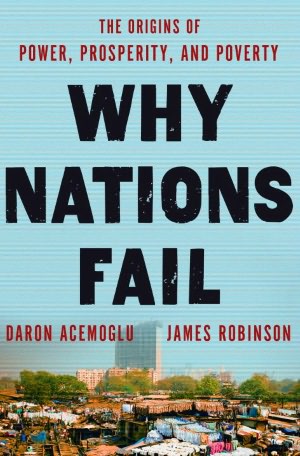 We live in an unequal world. Some Nations are rich and some are poor.

In rich countries, individuals are healthier, live longer, and are much better educated. They also have access to a range of amenities and options in life, from vacations, to career paths, that people in poor countries can only dream of. People in rich countries also drive in roads without potholes, and enjoy toilets, electricity, and running water in their houses. They also have typically governments that do not arbitrarily harass or arrest them; on the contrary, the governments provide services, including education, healthcare, roads and law and order. Citizens vote in elections too and have a say in the direction of politics. p44

Understanding why these differences exist and what causes them is Daron Acemoglu and James Robinson's focus in this book.

Developing such an understanding the authors write, ‘is not just an end in itself, but also a first step in generating better ideas about how to improve the lives of billions who still live in poverty.’

Poor countries are poor because those in power make choices that create poverty. The opposite is true for why rich nations get it right.

Countries differ in their economic success argues Acemoglu and Robinson because of their different institutions, the rules influencing how the economy works, and the incentives that motivates people. Thus nations fail today because their extractive economic institutions do not create the incentives needed for people to save, invest and innovate.

Acemoglu and Robinson uses North Korea and South Korea as an example:

Imagine teenagers in North and South Korea and what they expect from life. Those in the North grow up in poverty, entrepreneurial initiative, creativity, or adequate education to prepare them for skilled work. Much of the education they receive at school is pure propaganda, meant to shore up the legitimacy of the regime; there are few books, let alone computers. After finishing school, everyone has to go into the army for ten years. These teenagers know that they will not be able to own property, start a business, or improve their living standards even if many people engage illegally in private economic activities to make a living. They also know that they will not have legal access to markets where they can use their skills or their earnings to purchase the goods they need and desire. They are even unsure about what kind of human rights they will have. P68

Acemoglu and Robinson also rejects the common hypothesis that people have often assumed was the major cause of why nations fail. They reject the geography hypothesis, the cultural hypothesis and the ignorance hypothesis and in their place they argue that to understand world inequality we have to understand why some societies are organised in very inefficient and socially undesirable ways.

Acemoglu and Robinson present historical evidence from the Roman empire, the Mayan city-states, the Soviet union, Latin America, Europe, United State and Africa to show that the way these nations were organized were instrumental, in fact, highly critical, of the success of the Nations.

Confucius once said, ‘in a country well governed poverty is something to be ashamed of and in a country badly governed wealth is something to be ashamed of.’ Aristotle the grand father of western philosophy also once said that ‘poverty is the parent of revolution and crime’. Echoing and personally agreeing with the words above and with Acemoglu and Robinson earlier sentiment that poor countries are poor because those in power make choices that create poverty.

Leaders need to make choices that creates wealth for the people not just the elite, and have good economic institutions created through politics and political institutions or else as history as shown, (e.g the Arab spring, the American revolution and countless other revolutions) that poverty is the parent of revolution and crime.