Are There Two Wills in God? Yes. 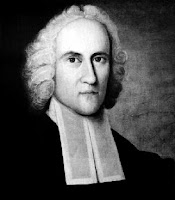 If you've never before heard about the existence of two wills in God, I recommend reading John Piper's article, "Are There Two Wills in God?" (which is also an appendix in the book The Pleasures of God).

In essence, what the doctrine states is that there are... well... two wills in God. The first will is his will of command (or as Edwards says below, "law"). This is expressed through God's revealed desires for people, desires such as "Thou shalt not kill," or "You shall love your neighbor as yourself."

The second will is his will of decree, which is the will by which God brings to pass all that actually happens, whether it accords with his will of command or not. This is also known as his secret will, since what God intends to do in any one event is unknowable to us, except for what he reveals through prophecy.

Here is the entirety of Jonathan Edwards' Miscellanies #7 (reformatted a little by me,), which he wrote in defense of this notion of two wills:

The Arminians ridicule our distinction of the secret and revealed will of God, or more properly expressed, our distinction between the decree and law [of God], because we say he may decree one thing and command another; and so they say we hold contrariety and contradiction in God, as if one will of his contradicted and was directly contrary to another.

But however, if they will call this a contradiction of wills, we do certainly and absolutely know there is such a thing, so that it is the greatest absurdity to dispute about it.

We and they [know it was] God's secret will that Abraham should not sacrifice his son, but yet his command was to do it.
[We] do certainly know that God willed that Pharaoh's heart should be hardened, and yet that the hardness of his heart was his sin.
We do know that God willed that [the] Egyptians should hate God's people. Psalms 105:25, "He turned their heart to hate his people and deal subtilely with his servants."

We do know that it was God's will that Absalom should lie with David's wives. 2 Samuel 12:11-12, "Thus saith the Lord, Behold, I will raise up evil against thee out of thine own house, and I will take thy wives before thine eyes and give them unto thy neighbor; and he shall lie with thy wives in the sight of this sun. For thou didst it secretly, but I will do this thing before all Israel and before the sun."

We do certainly know that God willed that Jeroboam and the ten tribes should rebel.
The same, we know, may be said of the plunder of the Babylonians; and other instances might be given. The Scripture plainly tells us that God wills to harden some men (Romans 9:18), that Christ should be killed by men, [etc.].