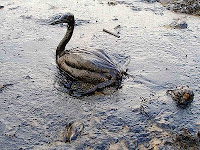 For one month and 29 days now, a damaged oil well in the Gulf of Mexico has been pouring oil into the sea, polluting the water. On Wednesday, BP’s boss Tony Hayward agreed to pay a minimum of $20 billion into a compensation fund for the victims of the oil spill. And, after a number of failed attempts to contain and stemming the huge flow, BP’s latest containment device finally seems to be making a difference. But for many, it’s simply too little, too late.

In amongst all the hysteria, speculation and confusion about who said what to who, and who is responsible for what, it strikes me that there’s a rather important question that’s not really being addressed, either by the media or by our governments.

That is, How do we handle notions of responsibility in a compensation culture?

In this case, just as with many situations where a beautiful relationship has gone belly-up, the offended party (pretty much the entire USA in this case) is eager to lay the blame squarely at the feet of the offender (BP) and demand reparation. And, indeed, what’s wrong with wanting to see things put right? What’s wrong with wanting people to somehow pay for the harm that they have done to us?

But how do we cope when it’s clear that things will not be as perfect as they were before a tragedy? The water will never be as clear or as clean, those heading to the beach will have to make new plans, and gulf coast wildlife will be scarcer.

No matter what BP do now, they can’t turn back the clock and undo the mistakes they made, and I can’t help but imagine how much Mr Hayward must want to (almost literally) wipe the slate clean. There’s only one who can truly do that – God, who through Christ forgives our sins and lets them fade forever from his mind. But that doesn’t mean that our actions don’t matter - forgiven or unforgiven, our mistakes come with consequences. Like BP, we may have to pay a financial price, for others it can mean a term in jail or the premature ending of a relationship.

But we will never lose God – he sticks to us like glue, and he can help us to weave a new path through the mess we’ve made and out the other side. It might not be the path we planned but we won’t be walking it alone, and we can trust that one day, God’s promises to us will be fulfilled. At the end of the Bible, the one seated on the heavenly throne says ‘See, I’m making all things new!’ (Revelation 21:5).

So we can we can be confident that one day things will be as good as new - the waters will run clear, creation’s original plans will be realized, and life will flourish in abundance.