Too young to vote? 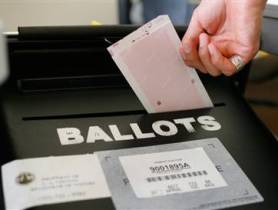 This week in his conference speech Ed Miliband joined a growing band of politicians promising to lower the voting age to 16. Alex Salmond led the way, the Lib Dems then followed suit and now Labour have done the same.

Disenfranchisement is a serious issue. Young people are not interested in politics. Would giving more young people the vote help?

The younger generation don’t use the vote they have and as a consequence policy is skewed towards an older generation. Free bus passes, TV licences and a winter fuel allowance for pensioners regardless of income make sense when you look at who votes.

Being allowed to vote is one thing, using it is something completely different.

So is a 16-year-old mature enough to vote?

At 16, you can live on your own, get married, pay taxes and serve in the army. But you will need your parents’ permission to get married unless you live in Scotland, and you won’t be allowed to serve on the frontline in war zones until you are 18.

You are not allowed to buy tobacco, alcohol, knives, fireworks or solvents. A 16-year-old cannot enter a casino or drink in a pub. You have to be 17 to hold a driving licence. But, from the age of 13 anyone is allowed to work part-time and in certain professions like the theatre, sport or modelling there is no minimum age, provided parents get official approval. Surely there should be no taxation without representation? But how many 16-year-olds actually pay tax?

The reality is that legislation is moving to keep young people in education or training until they are 18. The recent trend has been towards greater protection of children, raising the legal definition of a child from 16 to 18 in some legislation.

Adulthood is being delayed. Generation Y or the Millennials, as they are known, have pushed back the five milestones of adulthood: completing schools, leaving home, becoming financially independent, marrying and having kids.

Those aged between 16 and 18 do occupy an unusual status in the UK. It is strange what as a society we have decided they can and cannot do. If we allowed 16-year-olds to vote we would join an unusual group of countries – Brazil, Ecuador, Austria, Nicaragua, Cuba and Argentina. These countries are not top of the list of thriving democracies.

But there is another point worth considering. If you are a Christian reading this article, then the chances are you made that decision before your 16th birthday. Most people who become Christians do so when they are young, and those that make this decision before their teenage years are more likely to remain committed.

The Church has invested a huge amount of time and resource into children’s and youth ministry believing those under 16 can make a life-changing decision. So why not allow those same people to vote?